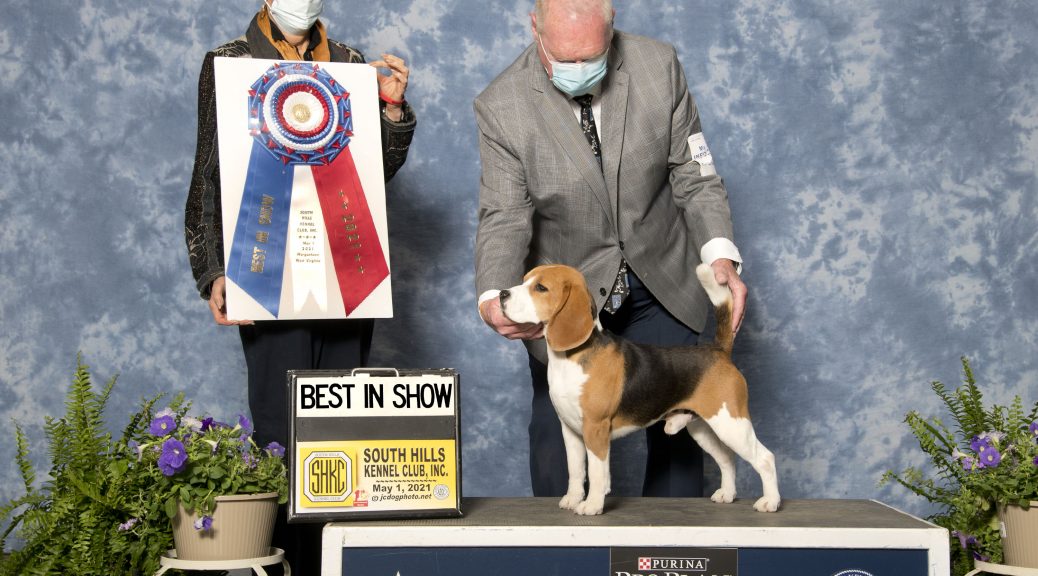 Nick is the son of our beautiful homebred champion Vixen and a handsome dog “Payton” (CH Malarky In Good Company).

We are so proud of this young dog. He is currently the #1 dog in the USA (All breed & Breed).

He finished his CH title from the competitive Bred By Class in 3 weekends.

His first 2 days as a new “move up” CH special, he won a group 3 under Ms. JoAnne Buehler and a Group 1 under Mr. Raymond V. Filburn Jr.

He received his first Best In Show Specialty at the Mid-Atlantic Hound show of Central North Carolina (MAHA) under judge Mr Neil T. McDevitt. His second Specialty Best In Show was awarded at the San Jacinto Beagle Club under judge Mrs. Molly Martin. Nick’s 3rd specialty win was under breeder judge Mr Eddie Dziuk and then his 4th was under Hound specialist Mr D. Scott Pfeil.

Karen even took him to “have a try” at his Good Canine Citizen award and he got it with flying colors – so they went for his Novice trick title also. We are starting to think there isn’t much this little dog can’t do.

I can’t wait to see what the future holds for this boy. He has started with such a bang and proved that he is such a gift already!

Nick is available at stud to approved bitches. Please email me sarah.sweetman@outlook.com for any details. His first puppies are on the ground and several have garnered their CH titles from the 6-9 month old classes, many with several big major wins and BPUP wins.

Heart is clear by Echocardiogram (April 2021).

You can see Nick’s genetic tests from Embark by clicking here: