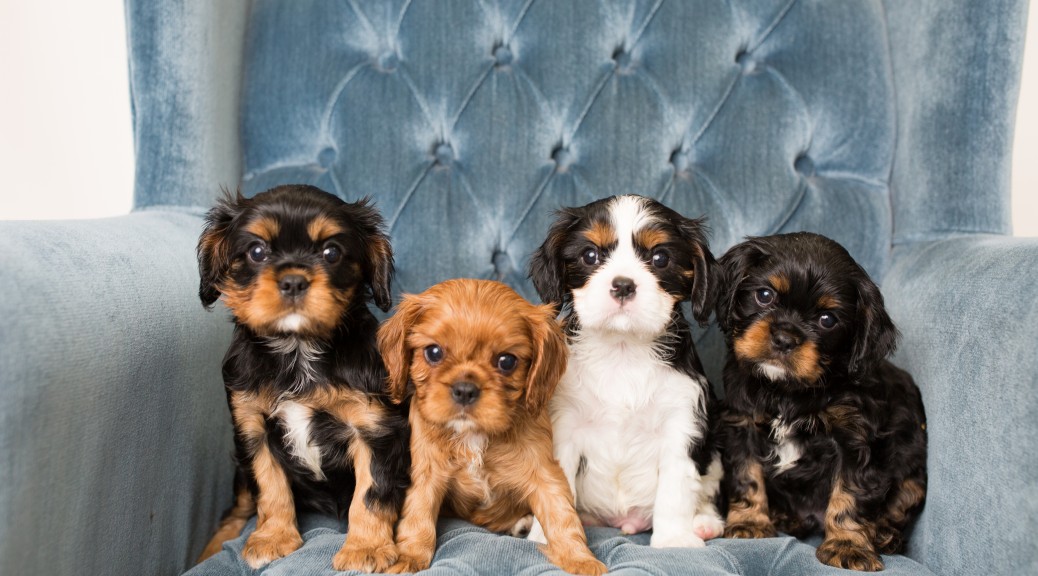 The Cavalier King Charles Spaniel is a small spaniel classed as a toy dog by the American Kennel Club.   The breed originated in the United Kingdom and is one of their most popular breeds.

The Cavalier King Charles Spaniel has a long silky, smooth coat.  Coat “feathering” can grow on their ears, feet, legs and tail in adulthood. Standards require this be kept long, with the feathering on the feet a particularly important aspect of the breed’s features. A Cavalier should be between 12 to 13 inches in height with a proportionate weight between 10 to 18 pounds.

The Cavalier King Charles is highly affectionate, playful, extremely patient and eager to please. As such, dogs of the breed are good with children and other dogs. They will adapt quickly to almost any environment, family, and location and suit city and country life.  Their ability to bond with larger and smaller dogs makes them ideal in houses with more than one breed.

Cavaliers are naturally curious and playful, but also enjoy simply cuddling up on a cushion or lap, making them excellent companion or lap dogs for medical patients and the elderly.  Cavaliers are active and sporting – proving successful in conformation shows, obedience and agility and they also make wonderful therapy dogs due to their sweet, gentle natures.  The breed is adaptable in their need for exercise, happy with either sleeping on the couch or taking long walks

Historically, the Cavalier King Charles was a designed as a lap dog during the reign of King Charles in the 18th century.  Ladies of the court would enjoy these little dogs as lap or feet warmers.  They were also used to attract fleas from nobleman’s beds.

WWII caused a drastic setback to the Cavalier King Charles breed, with the vast majority of breeding stock being destroyed due to wartime hardship and food shortages. Following the war, just six dogs survived as the new beginning from which all present-day Cavaliers descend.  Unfortunately, the impact of this is seen in the health of today’s dogs.

Cavaliers can often suffer from, most notably mitral valve disease, which leads to heart failure. This appears in most Cavaliers at some point in their lives and is the most common cause of death. Cavalier King Charles’ also have the potential to develop Syringomyelia (SM), hip dysplasia, luxating patellas, and vision problems (such as cataracts).   The expected average lifespan of a Cavalier King Charles Spaniel is under ten years.

For this reason, it is important to find a breeder who extensively health tests their dogs to minimize the chances of passing on these undesired traits.