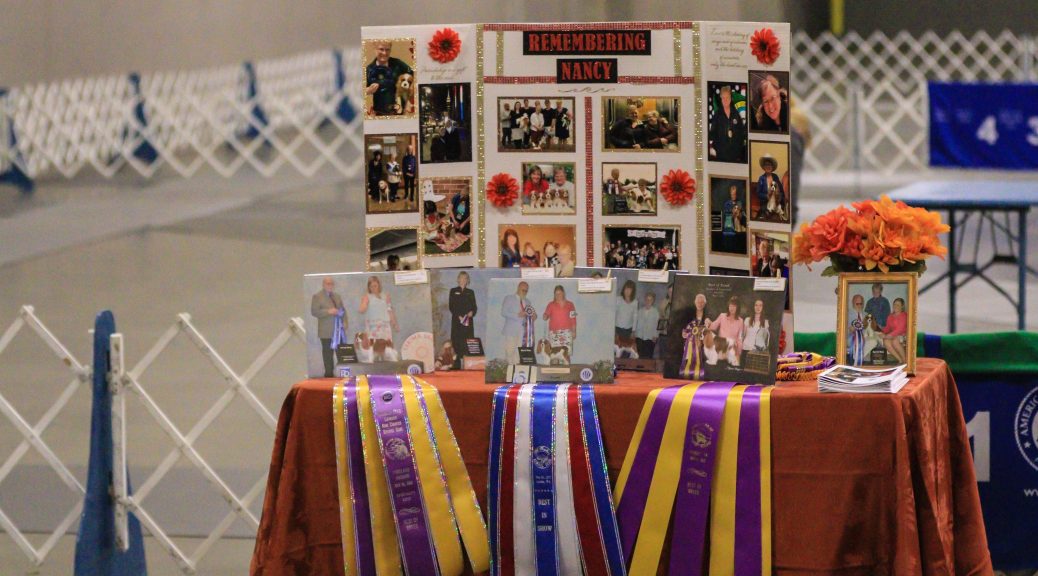 Because of COVID, we have all been starved of going to going to shows. The State-wide restrictions have made it almost impossible all year to get together.

The Cavalier of Puget Sound (COPS) show, which are usually held mid year, were postponed till this weekend in the hopes that the numbers would be smaller. They were able to join with the shows at Richfield WA and have back to back specialty shows the day before the All breed shows that were happening on the weekend.

So, Phoenix and Summer and I, met Susan and Alisha from Lockestar cavaliers, who brought along Sirius, James and Christopher, and we had a day full of fun with our fellow cavalier fanciers. There were rules of course – stay 6ft apart and wear a mask at all times, but we all complied – anything to be able to do what we love 🙂

The second COPS show was dedicated to the late Nancy Rice Waggoner who passed away earlier this year. She was incredibly dedicated to the sport of cavaliers – what I mean by that is what she didn’t just see them as “pretty” lap dogs, but saw them as capable working dogs also, and many of her dogs worked on other titles as well – they got therapy titles so she could give back to others and agility titles so they could show they could move and keep their brains active. She tried to breed to the standard winning many accolades over the years – Best of Breeds, Group Placements, Best in Shows – her hard work showed in her placements. And she was a really lovely person. I always remember her smile greeting everyone at every show I went to. I was glad this show was dedicated to her memory.

Here are some of the many wonderful memories from the show – obviously not everything is here – thank you to Becky Smith’s husband Steve for taking photos ringside.

Today I’m writing about a topic that makes me want to reach for a blood pressure pill: the annual (over) vaccination of dogs.

Annual vaccination is unnecessary and dangerous for your dog. Despite what we know about the risks, it seems to be what most vets recommend to all dogs.

Experts like leading veterinary immunology researcher Ronald D Schultz PhD proved decades ago that most dogs will be protected for many years – and probably for life by one round of core vaccines as puppies – as long as they are completed about 16 weeks old.

Only Rabies is actually legally required. Parvo is highly recommended as it can be lethal if not treated quickly and effectively.

“The patient receives no benefit and may be placed at serious risk when an unnecessary vaccine is given. Few or no scientific studies have demonstrated a need for cats or dogs to be revaccinated.”

But unfortunately, often these studies do nothing to stop vets from vaccinating more often than necessary. Dog owners need to advocate for their dogs and be the ones to say “no” or ask for a TITRE TEST.

A titer test is a simple blood test where they look at the immunity level of your dog’s blood against the virus. If your dog has low immunity, the vaccine is recommended. If they have high immunity then it is not.

Over vaccination has be attributed to auto-immune disorders, allergies, epileptic seizures and neurological issues and cancer.

Please, please advocate for your dog. 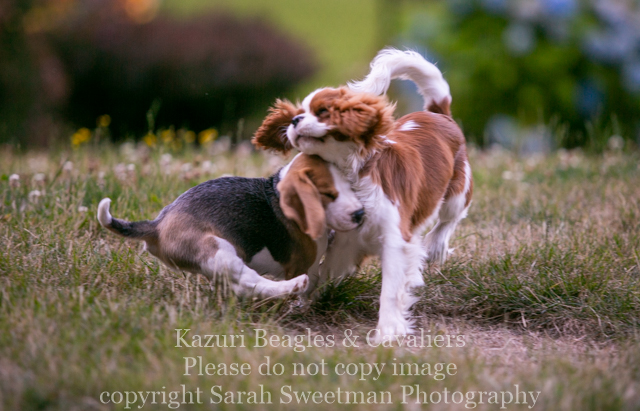 I love watching my puppies play – they are a constant source of joy and laughter. I wanted to share a couple of out-takes that I happened to catch this week and share the joy.

The little faded tri boy colliding with my little 6 month old cavalier Summer. No cavaliers or beagles were injured in this 🙂

My other out-take was Miss “Katherine” from my Vixen x BJ litter – she was trying to jump onto the back of a chair, but she mis-calculated. Well, you can see the results 🙂

Just like the first image, she was just fine and dandy – but it made for a good giggle for me.

Have a great day everyone!

Our precious cavaliers may encounter this devastating disease. Reputable breeders are working hard to minimize the odds of this in their bloodlines, but it is not an exact science. SM is a complex disease. There is so much we don’t know about it. We can have dogs who don’t exhibit symptoms produce it,. There are some who are diagnosed by MRI with it, who are asymptomatic (no symptoms), and others who do have it and exhibit symptoms.

Unfortunately we can not genetically test for it, so we have no way to predict which puppies may or may not get it. We do know it is polygenic. This means that it must be inherited from both sides, and it does seem to look like it can be passed hidden through many generations before popping up in the “perfect storm” in one puppy who exhibits the symptoms.

The Cavalier King Charles Club (CKCS) put together some information about SM that I wanted to share with you.

SM is a progressive neurological disease that varies in severity. Cavaliers unfortunately are affected by SM in larger numbers to any other breed. It is found in all colors, in all lines, and affects both sexes. Signs are usually noticed in dogs between 6 months and 3 years but it has been diagnosed in Cavaliers up to 10 years old. At present the condition can only be identified by MRI scan or by clinical signs. SM occurs when a Cavalier is born with not enough room in the space in the skull that contains the back of the brain. Damage is caused when fluid (CSF) surrounding the brain is forced through a smaller than normal opening, into the spinal cord. The most common symptom is scratching on, or in the air near, the shoulder when the dog is excited or walking on a lead. However this is not the only symptom and it is not always present. Some refer to SM as “neck scratcher’s disease” because scratching the neck is often a sign of the disease.

The primary symptoms (usually at least one of these is present) are described as:

The secondary symptoms are described as:

Understandably, such descriptions can be confusing – how much scratching is ‘excessive’, for example? Some people might turn to their vet with such questions, but many have found their vets were unfamiliar with syringomyelia.

Medical management can help but typically does not resolve the clinical signs. Signs in mild cases may be controlled by non steroidal anti-inflammatory drugs (NSAIDs) e.g. Rimadyl. Although corticosteroids are effective in limiting the signs most dogs require continuous therapy and subsequently develop the concomitant side effects of immunosuppression, weight gait and skin changes but sometimes there is no alternative and the lowest possible dose should be used to control signs. Gabapentin can also be given in combination with NSAIDs. Side effects are minimal and for this reason Gabapentin is preferred over corticosteroids. Oral opioids are also an alternative for example pethidine tablets at 2-10mg/kg three to four times daily or methadone syrup at 0.1-0.5mg/kg three to four times daily. Acupuncture appears to help some dogs. If the dog has seizures, then these can be controlled with phenobarbitol and potassium bromide

Our precious cavaliers may encounter this devastating disease. Reputable breeders are working hard to minimize the odds of this in their bloodlines, but it is not an exact science. CM is a complex disease. There is so much we don’t know about it. We can have dogs who don’t exhibit symptoms produce it,. There are some who are diagnosed by MRI with it, who are asymptomatic (no symptoms), and others who do have it and exhibit symptoms.

Unfortunately we can not genetically test for it, so we have no way to predict which puppies may or may not get it. We do know it is polygenic. This means that it must be inherited from both sides, and it does seem to look like it can be passed hidden through many generations before popping up in the “perfect storm” in one puppy who exhibits the symptoms.

So, lets talk about what CM actually is. The best way I can describe it would be to liken it to try to put your foot into a shoe that is too small for your foot. It is when the brain is too large for when the skull to the point that the cerebellum and brain stem are herniated into or via the foramen magnum.

Some people believe it is because the cavalier head shape has changed, but I am not entirely convinced by this theory as I have seen CM in both “domed” shaped heads as well as “flat” shaped heads. Some vets have talked about diagnosing CM by the shape of a cavalier’s head (not through MRI) and I believe that there is plenty of evidence that proves that there is CM (and clears) in many different head shapes and so i think we need to be careful of that.

Really, as a breeder, just do your research – ask questions about if your breeder does scanning and which dogs in your puppy’s bloodline have been scanned. Scanning will not guarantee your puppy will not get it. However, it may decrease your chances of getting a puppy who might have it.