James is Arrow’s son from her breeding to Dustin from the UK who is owned and bred by Mary Cunningham from Verheyen Cavaliers.   We co-own him with Alisha from Lockestar Cavaliers and Susan Lockleer.

We think he looks so much like his handsome daddy.  James finished his championship gathering four majors!!  One was even over several specials.

He is a sweet and smart boy who completed both his Good Canine Citizen Award and Novice Trick Title with ease.

James has several litters on the ground and is proving to pass on his beautiful headpiece and shoulders.  He is also passing on his sweet easy going nature.  James is available to approved bitches that are compatible in pedigree and health testing. 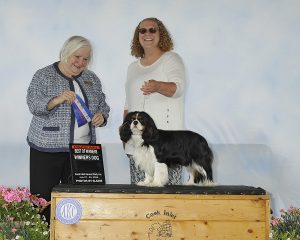