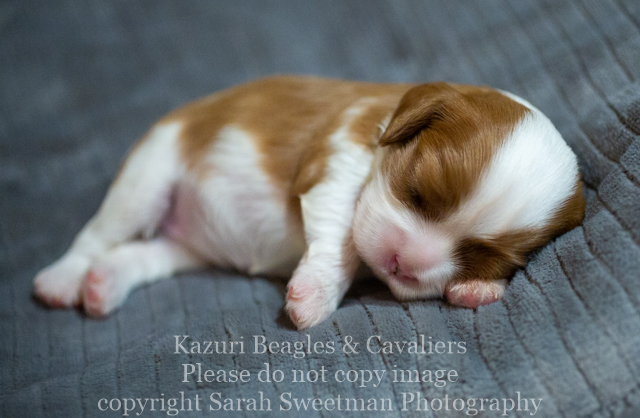 I am not going to lie. It has been a long 2 weeks. I have never had such low lows in all of my breeding. I have heard of this happening to other people, but have only experienced losing puppies at birth. I have never (till now) lost a puppy once they were older than a day.

I lost puppy boy #1 on day 3 – I put it down to maybe he had something congenital and was weak and everyone else was fine. But on day 9, puppy boy #3 (named George) started crashing. I tube fed him, kept him warm, had him in the oxygen tank but he kept getting weaker and weaker. He showed signs of respiratory distress so we suspected pneumonia and I instantly regretted not putting the whole litter on clavamox after the first puppy died. Unfortunately, while we fought the good fight, he kept getting weaker, and passed away also. I of course, now put everyone else on clavamox. But it takes about 48 hours to kick in. Not quick enough for little George.

On day 10, the smallest girl (Peggy) started to show signs of dehydration and being weak and raspy breathing – the early signs the boys had shown. I instantly went to work on her. I also managed to get some amazing advice from some experienced cavalier breeders of a medicine they put in a nebulizer to help with respiratory illness. At this point I had nothing to lose. I drove to Kent late at night to get a smaller oxygen tank and the meds. Within hours of the first treatment her breathing had already gotten easier – I couldn’t believe it! I continued to tube feed her around the clock every 2 hours for 2 nights and then weaned her off them oxygen. And when the other little girl (Eliza) got weak, I gave her the same treatment and the results were the same – an instant turnaround.

Here we are on day 14. It feels like a milestone that I dont normally celebrate this much, but I am elated. All the babies are off oxygen, with mama full time. They have all doubled their birth weight – in fact some are close to tripling it.

Here are my little lovies. <3 Their eyes are all opening and they are beginning to explore their world.

I dont know who might be available from this litter yet. I will be evaluating them closer to 7/8 weeks and will contact families around then. Thank you for understanding and your patience. I appreciate it very much.